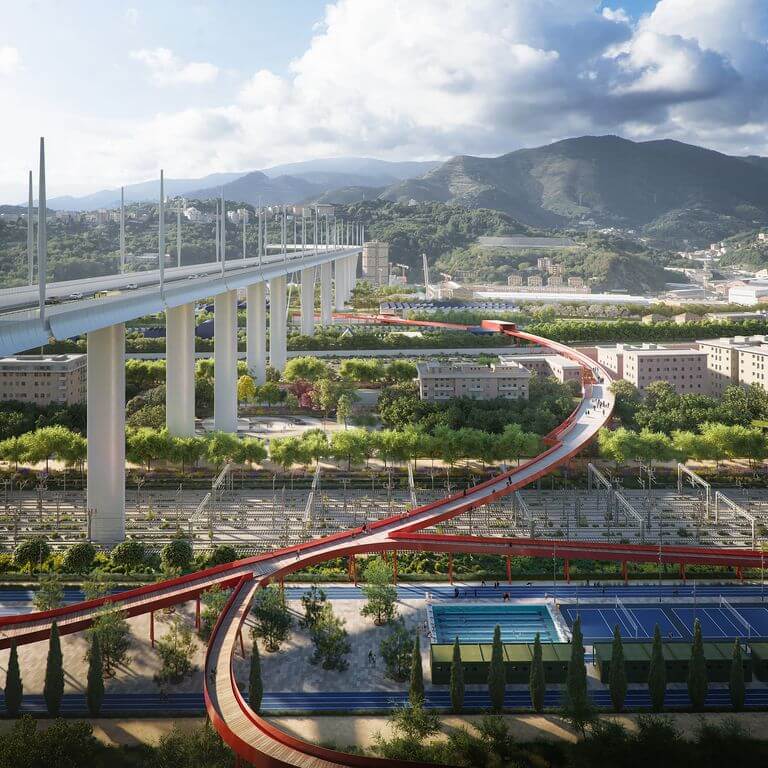 Construction of the Morandi Bridge, aka the Polcevera Viaduct, in Genoa was completed on July 31, 1967 and was a “brave and grandiose work”, as Italian President Giuseppe Saragat referred to it then. It was an impressive eleven-span structure, with a length of more than 3500 feet (1102 meters), a height of 148 feet (45 meters), and three 300 foot (90 meter) support pylons It was the largest bridge in Europe at the time and the second largest in the world.

The appearance of the new bridge was met with great enthusiasm. It was baptized the “Brooklyn Bridge”, although it did not resemble the New York original very much. The fact is that the Polcevera Viaduct was of great practical and strategic importance. It was a segment of the European highway system connecting Northern Italy with Southern France, and was the main transport artery between the center of Genoa, the port of Voltri-Pra, Cristoforo Colombo airport and industrial areas of the city. From an aesthetic point of view, the Polcevera Viaduct was fully in line with the fashionable architectural theme of the 60s – a clearly defined load-bearing structure of monumental proportions. In short, a complex simplicity. The designer of the project, the famous Italian engineer Riccardo Morandi, was an internationally recognized specialist in prestressed concrete. This material, being economical and having great technical and artistic capabilities, was one of the main themes of modernism architecture – it was perfectly suited for the creation of open functional and spatial structures. Thanks to his innovative patented reinforced concrete structure, Morandi defied gravity and made the viaduct appear to float in air. He managed to increase the span length and make the bridge architecture lighter and more airy. In addition, the reinforced concrete had the added advantage of protecting the metal bearing cables from corrosion. However, it was here that the engineer’s error was hidden. According to Professor Carmelo Gentile, “it was difficult to prevent air pockets or bubbles in the concrete with the technology that was available at that time”. During a heavy rainfall on August 14, 2018, the 200-meter span of the bridge collapsed along with one of three main support pylons. Analysis of the wreckage revealed that most of the metal in the concrete was severely corroded in the collapsed section of the bridge.

A decision was made to construct a new bridge rather than attempt to salvage the existing structure. Many great architects submitted designs, including Santiago Calatrava, but the project was awarded to world renowned architect and Genoa native, Renzo Piano.

Piano tried to completely move away not only from the look of the Morandi Bridge, but also from the idea of cable-stayed construction. The project, according to the architect himself, was “simple, but not trivial”. The ship was taken as a prototype as a symbol of a seaside town. During evening hours, masts and lights create a semblance of sails.

The new bridge is 115 meters shorter and approximately 65 feet (20 meters) south of the original structure. Its beam construction is made of the same materials – steel and reinforced concrete, but the primary difference is that the concrete no longer has a protective function. An important feature of the new project is the presence of three internal passageways and a complex high-tech system with special sensors, robots for inspection and cleaning the structure, as well as special tools to regulate the moisture level. The Renzo Piano Bridge will be the first “smart bridge” in Europe. And below it, will be the Polcevera Park or the Red Circle of architect Stefano Boeri. The Red Circle is the urban axis, which is a pedestrian and bicycle lane on the overpass. It will connect all the park’s territories and facilities, or rather the park’s systems, in which many plants of the Mediterranean will be represented. Here, one will be able to sports, play with children, pick flowers and fruits, walk with animals and participate in various entertainment and educational programs. 43 trees will be dedicated to famous personalities who were born in and made Genoa and Liguria famous, including: Montale, Pivano, Germi, Villaggio, Strozzi, Scanavino, Alberti and Coppedé, to name a few.

Much was learned from this tragedy. The old bridge was created in an era of unbridled faith in technological progress that was impossible to stop. But each generation is able to improve upon the previous one’s discoveries, ensuring that safety, functionality, and beauty are at the forefront continue to be advanced.